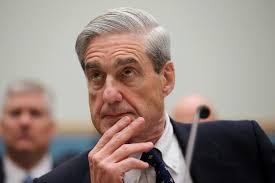 Apparently, Bob Mueller believes we Americans are uninformed and ignorant of the law and we should just “trust” that he will do the lawful and honorable thing. If Mueller would release a statement of the Title and Section of US Code he is investigating …I might keep quiet about the absolutely unethical manner in which he is conducting his investigation…correction, witch hunt. But in the almost 2 years of his Russian “collusion” investigation, I have never heard, not once, what violation of the law he is investigating. Colluding is not a violation of the law, obstructing is not a violation of the law. What is or are the substantive laws that “you”, Mr Mueller, believe were violated by our duly elected President Trump. I, for one, am sick and tired of the unethical, unlawful way that the so called Special Prosecutor is bullying his way around the law!

On May 20th I wrote this in response to what a brain dead Congressman had said “…there is no doubt the president, who appointed Comey to continue as his FBI Director, absolutely had the right to fire him, when he lost confidence in him and for no other reason. He also, by law, can order the FBI Director to open or close ANY FBI case without explanation. He can order the AG to do the same, with… “Because I said so”, as his only explanation. The evidence shows very strongly that Comey should be indicted himself for Obstruction of Justice – Hobbs Act, Destruction of Government Property, Disclosure of Classified Information T18S798USC, and many more. (Please note there are substantive violations attached to the Obstruction allegations!)

The President can walk into any FISA Court and listen to and read any evidence, the same with any NSA secret monitoring site and listen to ANY wiretap he wants. He can Classify AND Declassify any document he wants, without any explanation to anybody”… AND, Mr Mueller, he can fire you. You can sue for racial discrimination or Equal Rights , or some other sour grapes, lame ass reason like a true Democrat would do…but you will lose.

Article 2 of the Constitution gives the President of the United States the absolute authority to fire anyone he has “lost confidence in”, doing their job. The Special Prosecutor was supposed to investigate Russian Collusion between the President’s Campaign and Russia. SO, now that there is none between the Republicans and Russians…the logical thing would be to switch to see if there was between the Democrats and Russians…guess what? There was! But… let’s ignore that and harass the President with Obstruction, while he is trying to find peace with N Korea, trade agreements that are fair to the US, build a wall to stop people from illegally voting for the likes of Pelosi and Schumer, and waste his time talking to Mueller!