I write this letter to you because I am confused.

I was an FBI Agent for almost 3 decades (29 years) and retired Supervisor of the FBI Buffalo Bank Robbery Squad. Most all of my career was in the Violent Crimes Program having worked in the New York Office for 6 years on the two “most active and hardest hitting Squads” in the entire FBI. Those were the words of FBI Director Hoover to ADIC John Malone, as told to me, by Mr. Malone when he assigned me to the Truck Squad, when I arrived in my 2nd Office, the NYO…

That assignment, according to Mr. Malone, was direct from Mr. Hoover for the work I did while in my first Office, Charleston SC. My partner and I arrested a bank robber who was armed with a shot gun an hour after the robbery; we rescued a 5 year old kidnap victim (Tondeleya Jones) kidnapped from Brooklyn NY; and I solved an armed robbery in the Bronx, NY where a NYPD uniformed officer was shot and later died… we subsequently arrested the armed subject. This was with info from an informant I developed in Charleston SC. Myself and two other first office Agents also compiled a record of some 200 arrests for Military deserters, escape federal prisoners and some substantive cases.

Mr. Malone assigned me to the Truck Hijacking Squad (260 cases per year), John Gotti’s crew and later, the Bank Robbery Squad (500 cases per year). In addition to our own violations, those two Squads also handled most all the SWAT type calls as SWAT was still in its infancy, with most SAC’s being against turning their power over to a SWAT Team of “mere” Agents. SWAT was finally accepted, by force from the top, and SAC’s had to work them into the more dangerous assignments, which they did…and they did quite well!  Until then… we handled all the skyjacking cases (5 during my tenure), Top 10 cases, major surveillances like Patty Hearst, Weatherman Bill Ayers, Bernadine Dorn, the BLA, Twyman Myers and …his Paramore… Joanne Chesimard… most of whom shot it out with whatever Law Enforcement Agency that took them on, including ours.  I drew up most of the search and arrest warrants for my squads after I departed the NYO.

I tell you all that because I thought I had a pretty good handle on US Code Title 18, but apparently… I don’t. I missed where it says we can do “selective enforcement” of the Code!?

So I write this Open Letter to you asking you to explain to us, American Citizens, how in the Federal Rules of Criminal Procedure and Title 18 USC, certain Sections like Treason, are now applied selectively, differently…Liberal Left Democrat Politicians are not prosecuted for heinous crimes and Conservative Right Republicans are Impeached for committing no  crimes…I’ll give you just a couple examples of the most confusing…

Title 18 Section 2381 USC states; “Whoever, owing allegiance to the United States, levies war against them or adheres to their enemies, giving them aid and comfort within the United States or elsewhere, is guilty of treason and shall suffer death, or shall be imprisoned not less than five years and fined under this title but not less than $10,000…”

In May 2014, President Barack HUSSEIN Obama, against the wishes of many, and in my opinion, most US citizens, exchanged 5 Taliban leaders, who were taken from battlefields by US forces, in return of a deserter who was charged as such, later court-martialed and fined $1000.00, and given a dishonorable discharge!?

On Oct 30, 2018, AP reporter Kathy Gannon, again visited this Act by Obama and wrote in part…At the time of the exchange “… some negotiators in Kabul say (this exchange) indicates the Taliban’s desire for a peace pact. Many of us feared the five, all of whom were close to the insurgent group’s founder and hard-line leader Mullah Mohammed Omar, bring with them the same ultra-conservative interpretation of Islam that characterized the group’s five-year rule that ended in 2001 with the U.S.-led invasion”. 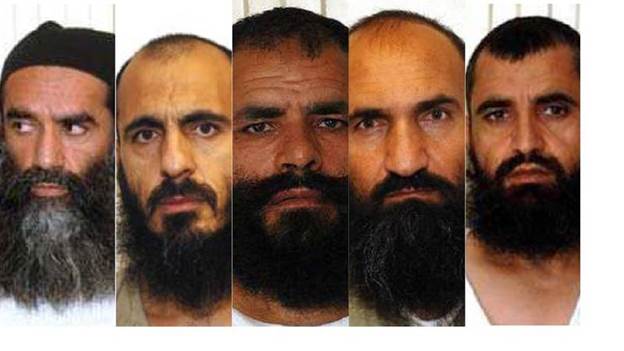 At that time, President Obama most certainly “owed allegiance to the United States”, the first element of Treason!

Element #2 … “adheres to their enemies”…releasing enemies who MOST definitely will return to the battlefield and or positions of leadership, to kill Americans. Obama knew that because he was and, I believe, is a Muslim of the same belief and of the same book of faith, the Quran, and knew or should have known how radical the Taliban was and continues to be to this day! I know that because Obama has said repeatedly that there is nothing more beautiful than the Muslim call to prayer! These 5 Taliban leaders have in fact rejoined our enemies and in leader capacities, whose well known goal is to kill Americans and destroy our Republic.

Element #3 …”giving them aid and comfort”…letting killers out of jail who are our enemies in a 5 to 1 exchange when those 5 are top leaders of our enemy, the Taliban, and our “1” is a deserter, loser, and traitor himself. That stands alone as Treason by Obama!

First, I/We…the American people believe that Hussein Obama is telling a hapless, unwitting Joe Biden what to do, when, and how to do it and knows, full well, that these acts are Acts of Treason. Biden’s handling of the Afghanistan debacle, is rampant with acts of full blown Treason along with a Conspiracy by Obama and Biden, to intentionally and with malice aforethought…to destroy our Constitutional Republic.

In my opinion, Obama, himself, would not have performed these Acts of Treason he is causing Biden to perform…he thinks he’s immune, buffered by a nut-bag! Obama believes that if he tells Joe to jump over Niagara Falls and he does, Hussein has no culpability. Here …he is wrong! It’s called Conspiracy to commit Treason and other crimes, also punishable by death and there is no Statute of Limitations on Treason! Obama feels, in my opinion, Joe can claim he’s nuts and nobody will argue that…tell it to the Hangman, Joe!

Element #2…”adheres to our enemy”…the irresponsible withdrawal of American troops out of Afghanistan before American Citizens and those we owed protection to, for their duty. This was so egregious that Biden’s staff and military advisors, and other world leaders advised against that tactic. This gave the Taliban complete and untethered control of the streets and airports. If that is not adhering to our enemy…what is? He adhered to our enemy and did it all but give them hugs and kisses! This directly cost 13 brave soldiers their lives!

Element #3…Giving the Taliban $85 Billion in high tech, dangerous US Munitions, Planes, millions of dollars in US cash…I THINK THAT’S AIDING AND ABETTING…MR. AG…don’t you?!

Mr. Attorneys General – can you please explain to us uninformed Citizens just how, why these two buffoons, Obama and Biden, are exempt from prosecution for High Treason at the Highest…they are destroying this Country…don’t you get it? You took an oath…best you read it again…and if you don’t want to enforce the laws you swore to enforce…do us all a favor…RESIGN!