Somebody sent me this photo which was taken at the scene by somebody who was there…I guess. It sure looks like a “fallen” Mr. Gugino.

If it’s true and accurate, it seems that it poses some things Mr. Gugino needs to explain. What’s the tube for? Did he have a capsule of blood in his mouth like actors use, and bit it on the way to the ground causing the blood to flow into his ear? That would explain the blood in the front of his ear…hmmm…that’s why we must wait until all the facts are in. 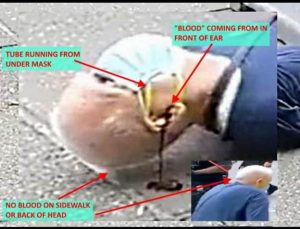 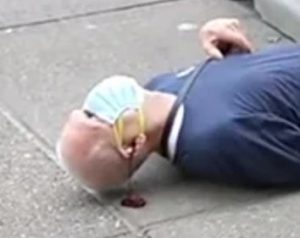 This appears to be Mr. Gugino …note the tube running from the mask.

If the blood came from his head contacting the ground, there should be blood under the wound, on the ground…shouldn’t there? Also if he didn’t bleed until he was cut…how did the blood run uphill at the bottom of the ear? It looks like the blood may have run down from the tube while he was more vertical than horizontal…doesn’t it? I don’t see a cut on the back of his head …do you?

I don’t know, and neither do any of you. So why was the Officer fired? If Gugino had C-4 in his cell phone and detonated it, he would have killed himself, at least two Officers, and injured several more.

Has there ever been a case of somebody doing such a thing?

Things are never as they appear… Administrative leave, with pay, yes, but fired…not in my humble opinion! But, there may be facts we are not aware of.

I worked so many cases that made the news (local, national and international), and I can honestly report that I don’t ever remember any case where the press got it right, correct, completely factual. So after having been on numerous   robbery, homicide, bombing cases… yes, bombing cases even here in Buffalo…remember, maybe 40 years ago? The press never got it right.

But they were never as prejudice, presumptive, so against the men and women who protect them (the Police), as they are now. And it’s almost all based on nonsense, lies, deceit, and prejudice against one person…our President.

Hussein Obama created this atmosphere to “assume the Police are wrong and to blame them”… “Assume they are guilty until they are proven innocent”!

Every time anything happened…from the Boston College professor to Michael Brown, Eric Holder and his troupe of liars, cheats, and thieves, he sent out to Ferguson, New Orleans, Texas…were out to prove the Police were guilty!! They were told to use any means possible…I assume…because that’s what they did! They broke every law in the book.

They created evidence, tampered with witnesses, and even the Federal Judges in Ferguson, New Orleans, and Texas held Holder’s band of “lawyers” in contempt of court numerous times and even took away the privilege from several of Holder’s Cheats, from practicing before some 30 Federal Districts as a result of contempt of court charges in Texas.

Now think about it…how many times were these poor COPS dragged through hell only to be found innocent, justified, cleared? MOST of the time.

For Christ’s sake give these guys a break…just follow the law and due process…”Innocent Until Proven Guilty”!

Or… you will find yourselves protecting yourselves …by yourselves and you won’t like “fighting for your life”…you may lose the fight! And …if you win…you’ll probably lose everything you own!

Think about that for a while!