THE ‘IG’ REPORT SHOULD BE NO SURPRISE TO THE PRESIDENT OR ANYONE ELSE!

I have written multiple times that the ONLY way Lady Justice will be satisfied and the corrupt Federal Employees  brought to justice, is if and when the President gets “directly” involved with what has been going on in DOJ and the security agencies…agencies  that have been abusing the FISA courts with illegal wire taps, throughout Obama’s administration.!

This IG report is a repeat of what Comey said when “he” declined prosecution, on Hillary, in violation of the Federal Rules of Criminal Procedure! The crimes that the IG didn’t mention are; Hobbs Act-Political Corruption; Interfering in  Federal Investigations; numerous  criminal acts involving the mishandling of both classified and unclassified documents; the storing of State Department communications on a personal computer of a State Department Staffer whose husband is a Felon; FBI employees who violated every FBI  Rule and Regulation pertaining to conducting subject interviews ,evidence handling ,with no explanation by the IG WHY Comey directed that the biggest political investigation of all times,( that’s the Clinton money laundering, email server, classified document violations, et al), be handled out of Headquarters and NOT an FBI Filed Office …like 100% of all previous investigations were handled?!

The “WHY” Headquarters was made the “Office of Origin” is significant but never touched upon! That’s a big question. The FBI never does that, ever, but Comey did. Why were witnesses, and other subjects as well as 5 attorneys allowed in the interview room? That’s a direct violation of common sense, and every FBI Rule in the book! Grounds for dismissal.

The accepting of gifts by FBI Agents, or any other employees, for leaked information, is political corruption that is an indictable offense, subject to immediate dismissal as is the leaking of freaking information! What the hell has happened to the FBI?

We could not accept a free ride (50 cents) on the NY Transit (subways) even thought the City of NY wanted armed FBI Agents on their public transportation! 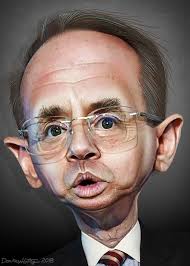 In my first column, 2-29-18, in this venue, I stated that major change must take place in DOJ and that the President must exercise his Constitutional Authority and order ALL the Clinton Cases be reopened: fire or suspend every, single FBI and DOJ employee whose actions are questionable starting with Rosenstein. Suspend Rod Rosenstein, order FBI  Wray to open a criminal case regarding Rosenstein’s knowledge and involvement with withholding information from the FISA court; his involvement with Strzok ,McCabe, Comey, Paige et al in the FISA court warrant on Carter Page!!!

In my opinion, you , the American public, do not understand how serious, far reaching, and involved the criminal acts committed by top Executives in Obama’s Administration are, including Barack Obama. James Clapper  NSA, John Brennan CIA, Comey FBI, Holder and Lynch AG’s, Hillary Clinton, Sec of State. I’ve said before and say again, Barack Obama’s Administration is a RICO Case! They violated ,the rights of citizens against unlawful search and seizure by using the FISA court anytime they failed to find Probable Cause for a legal, Title 3 warrant! They did that repeatedly and MUST NOT get away with it or we should just tear up the 4th Amendment, because that’s exactly what Obama and his band of thieves and liars did…regularly!

The biggest mistakes, in my opinion, that the President made are the appointments of Sessions as AG and a non former, experienced FBI Agent, who came up through the ranks, as FBI Director. My calls for James Kalstrom and other very qualified retired Agents fell on deaf ears, what a shame. Nothing against Wray…no one will understand what I mean unless they “served their time” as Agents….real, criminal Agents and NOT Security, Intelligence gatherers who never conducted a criminal interview.

When Richard Nixon decided that he wanted out of politics and decided he wanted to be an FBI Executive, he contacted Director Hoover and explained his desires. Director Hoover handed Nixon an applicant package and explained how, after 4 months of training school, Nixon could work his way up, if he qualified, to an executive position…true story! Nixon stormed out of Hoover’s office.

Neither Director Wray, nor previous Directors like Gray, or Webster, or Mueller or Judge Sessions, or any other former Judges /lawyers or anybody else, with no FBI Agent experience, has ANY chance of straightening out this mess. It can’t be done without the right people.

Make Wray AG, let Sessions step down and suspend Rosenstein, et al, now. Put Mueller on “temporary” hold! AND open the old Hillary, FBI Cases and new cases on all those involved! There is no other way…my opinion!

Mr. President, the statutes of limitation are running…get involved now…please! Those of us who spent decades on the job are giving you good advice. Danny Coulson ,a regular on FOX news, and I were on the Bank Robbery Squad in NYO for several years and worked together many times. He tells it like it is and we share the same philosophy on enforcing  the laws of the US…they apply to all equally!