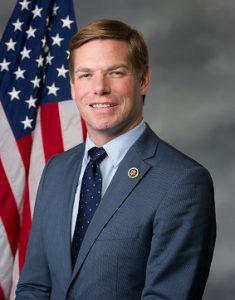 Tucker Carlson invited Congressman Eric Swalwell of California to appear on his show. He apparently has no concept of what probable cause is, and what evidence looks, or sounds like, or any idea how the laws of evidence work.

The congressmen wished to put forth evidence that the Trump campaign “Colluded” with Russians to get Trump elected in the 2016 election.

The congressman used legal terms like there is “tons of evidence” against Trump trying to influence the election.

First of all, there is no Federal Crime called “Collusion” in the US Code related to any general criminal charges. It pertains only to Anti Trust and has never been charged. There are no laws in the US Code book that prohibits any US citizen from talking to any foreigner, Russian or otherwise, about getting opposition information on an opposition candidate, like Hillary Clinton did using Fusion GPS and Chris Steele to obtain opposition info from Russian sources, against Mr. Trump.

There are laws, however, that prohibit the FBI, NSA and CIA from using the FISA courts to obtain wiretaps (which are much easier than Title 3 warrants) and other surveillance techniques against US citizens when they want to circumvent the cumbersome and restrictive Title 3 application procedures. So by fabricating a “foreign counterintelligence plot”, using FISA courts against US citizens by placing a “spy”, in a campaign made it legal!

Let me guess who came up with this plan…hmm, how about either FBI McCabe or Strzok? This is mind boggling that anyone in the FBI and DOJ could possibly be that stupid! This proves that you should never promote FBI Agents with no Criminal Experience to executive jobs!

If there is a crime, Swalwell would know what the crime is and would be able to NAME the Title and Section of US Code.  Swalwell could not name by Title and Section of US Code what justified a “spy” infiltrating the Trump campaign. The “spy” is being called that by the left because; the CIA by law, is prohibited from investigating US citizens in the United States. That’s the sole responsibility of the FBI. The FBI calls those people INFORMANTS and not spies, because the word connotes a foreign operator, but the FISA Court is reserved for Foreign operators and not citizens.

This whole operation smells like John Brennan and his partner in crime, James Clapper. It smells so bad that Eric Holder could have used his brilliant legal mind here like he did in Fast and Furious but Rod Rosenstein has a smell of his own!

Here’s what I believe happened with regards to the “spy”; Obama probably told Brennan that he can do no more to stop Donald Trump and that he, the president, would look the other way. He gave Brennan a free hand who in turn conspired with James Comey and Rod Rosenstein and Sally Yates to come up with Plan B, a foreign counterintelligence investigation against Trump.

They needed to create a Russian “in” to be able to create their investigation and use the FISA Court as there was no PC for a legal Title 3 wire. With Strzok’s “ in” with a FISA Judge, why not try?

Enter the blind leading the blind…Carter Page and George Papadopoulos, two freaking idiot, wannabees who would do anything to get next to the Trump campaign, shoot off their mouths at bars, parties, to anyone who would listen, and finally some Australian does and tells the FBI, “the Russians have dirt on Hillary”. What a scoop…anyone who spent 5 minutes with Hillary has dirt on her.

I suspect James Comey is the agent provocateur who tells Strzok and McCabe to open the Foreign Intel Case. Curly, Larry and Moe now have their “Back Up Plan, Plan B”. Keep in mind that Comey told Trump, that Trump was not the subject of an FBI criminal investigation… his Campaign was, however, the party in interest of a Foreign Counter Intel Matter!

Congressman Swalwell has no evidence about anything, he doesn’t know what evidence is and that seems to be the trait of any elected official from the left State.

The president simply must, for the sake of our country, take over and say… “That’s it, I’ve had all I can take with this “Corruption Incorporated” and can stand still no longer! I am taking charge and making changes”! Then just do it!