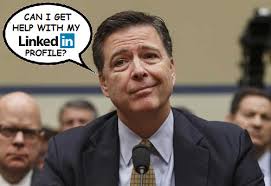 Most Executives try to expand their office, improve it, improve the outlook for the future and improve moral. They want the public to know and trust their business whether the business makes refrigerators, computers, or TVs, provides services or investigates crime! James Comey did the exact opposite on all fronts! He turned a trusted, efficient, and dedicated Agency into a water cooler joke. He did that with about half a dozen employees who are deaf, dumb, or corrupt.

He took the ability of the public to have a personal conversation with an FBI Agent away and replaced it with a recording that says, “If this is an emergency, hang up and call 911”. Try calling your local FBI office and see what you get!

Everybody has an ego but successful people don’t trip over their ego. Comey falls flat on his face and I believe that this arrogant, corrupt former government employee, opportunist, has taken enough rope and has hung himself with his “greed for cash.” I understand why he needs cash because his future attorney fees will finance a new Trump Tower!

I have not read his book, nor seen any excerpts or heard his George Stephanopoulos, National TV, self-serving “interview” but, Comey and former AG Loretta Lynch cannot both be telling the truth on a number of issues, and one must be lying. Same with Comey and former FBI Andrew McCabe, both cannot be telling the truth on many statements of fact. One is lying. I said many months ago that Comey will throw all those who worked with, or for him, “under the bus.” His book is going to prove me correct. The lies these people told are not about illegal use of campaign funds or bank loans; they deal with treason, Hobbs Act, Conspiracy, political corruption, and I believe the murder of a Supreme Court Justice.

Also, I don’t understand if Comey is just plain stupid or unbelievably brilliant, but he has admitted to committing numerous Federal felonies, in public as well as under oath before Congress. If he thinks it was okay for him to take, carry away, disseminate, destroy, and/or leak information that he produced as FBI Director, he needs to call my attorney, Dewey Screwum, because he is the only one who would guarantee getting Comey off! He needs to read T18 Sec 2071 USC more carefully!

I never really spoke to J. Edgar Hoover, but I did speak to and spend time with Former Directors L. Patrick Gray, and Judge Bill Sessions and worked with a friend, Bill Baker, who worked close to Judge Webster and became Assistant Director CIA under Judge Webster. I have spoken to current and former Agents who did work for Comey and can safely say that James Comey’s leadership likens to that of the Captain of the Titanic. Compared to those before him, with the exception of Bob Mueller, Comey was ONLY interested in self enrichment, personal enhancement and could care less what happened to the FBI and our Rule of Law. His actions to endear himself to the Clintons years ago, yielded both financial enrichment and advanced his “political” career. Hence, Hillary was innocent…not so fast…there’s a new Sheriff in town!

When this President finally gets a grip on his DOJ and takes control with a strong AG, this country will see the FBI uncover some of the worst crimes that have ever been committed against the United States by Attorneys General, a Secretary of State, an NSA and CIA Director and a former President.